They call me „The Horrible“…

Well – it‘s not exactly ME whom they call „The Horrible“, BUT: the huge bell which more properly goes by the German name of „Rats- und Brandglocke“ – Council’s and Fire-Bell – you can see and hear it on YouTube: (Klick!) – and this is its story:

(…) when the third gothic style hall church (St. Lambert’s) was built in 1375, they added two additional storeys and put a platform with an octagonal cupola on top (in the amount of about 50 m). This rarely seen shape defines the tower as the city’s watchtower: it hosts the alarm bell.

This special shaped alarm bell was made by Hermann von Essen aka Klockengeiter van Unna in 1594, and the inscription reads: „vocor horribilis tempore periculi cives convocans“ – which means something like „my name is The Horrible, in hazardous times I summon all townsfolk“.

The tower keeper‘s office room was then located inside the cupola, and the tower keeper had to make the bell sound – not by pulling but by clanging, which is also called „beiern“ in German.

The day before the elections of the city counsil, this bell operated as „Ratsglocke“ – bell of the aldermen – and summoned the citizens.

And in the 19th century, there even existed  something like a carillon on St. Lambert’s church with about 40 chimes, and the tower keeper‘s job was to play just before the full hour (…)

And still today I – as the first female tower keeper – have to clang the „Rats- und Brandglocke“ – to call attention for the swearing-in ceremony of the new elected Mayor of Muenster! Next targeted date:

And just for the fun of it here is another interesting fact about the bell just a few people have ever known of:

Someone misspelled the latin word „cives“ (= townsfolk or citizens) in 1594 – as you can still see, the word once read „cvies“, and of course considerably more favourable than to melt and cast the bell anew, they changed the letters by scraping out the „i“ and putting a new little „i“ between the „c“ and the „v“ … 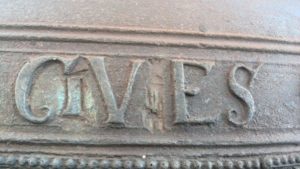 But in cases of fire, this bell has lost its former purpose; in our times the tower keeper phones the fire fighter department and gives an alarm signal with the horn, consisting of very short accented  sounds… so please keep that in mind whenever you hear „my“ horn – although most of the time you would hear the looooong sounds meaning: everything‘s safe within the inner town; no fires, no foes…!